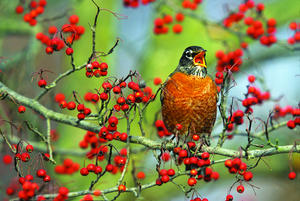 Birds can see two to three times more sharply than humans. Some birds have monocular vision, while others have binocular vision.

The American Woodcock’s eyes are positioned in the back of their heads, which may be a protective feature, as the woodcock watches for enemies while it probes for food.